The following post is written by Julie Whiteman of University of Birmingham who is currently researching how contemporary media representations of heterosexuality communicate ideas around sex and relationships, and looking at how this fits with sexual violence against women. 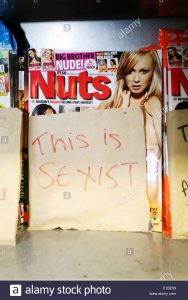 This article was a landmark for me in my PhD literature review reading material. I was shocked by what I read, and it helped shape the research aims for my own research into how media work with people’s internal beliefs.

In this article Miranda Horvath and colleagues found that the young women and men in their study could not differentiate between the language of lads’ mags and that of convicted rapists. They also found that the language used in lads’ mags was considered more ‘extreme’ and that young men identified more with statements when they were attributed to lads’ mags.

The authors drew their sample quotes for the study (identified as expressing a ‘hostile sexism’) from a range of lads’ magazines. These magazines included articles which advocated their young male readers to get drunk, fake sincerity (to women), and to target “’vulnerable women’ for ‘sexual conquest’” (p455). The researchers also took quotes from interviews with convicted rapists, known to use “techniques of neutralization” (p456) i.e. language that diminishes their own responsibility and places it with women.  The researchers found people had difficulty differentiating between the two, guessing correctly just 55% of the time – that is a 45% error rate of confusion between sources. Participants judged the content of lads’ mags to be more derogatory than that of the convicted rapists, and yet, when the statements were attributed to a lads’ mag, the men were more likely to identify with them.

This result led the authors to question the blurred boundaries of speech between the two sources. What this research does which previous research does not is to explore how young people make sense of the magazine articles they read, bringing into question the role these media play in the socialization of young people and addressing the denials of magazine editors that their publications are of no social influence. Horvath et al. argue that these magazines are a normalizing and legitimate source of information, that they have a normalising influence on the sexist beliefs they communicate about women. This was summarised by one participant in the study who claimed that the content was degrading but in a way that was OK because it was in a glossy magazine, or another who said that while the magazine didn’t condone rape, it used language that made it appear consensual.

While the lads’ mags market has changed significantly since this article was published I believe that its findings on the normalising effect of mainstream content holds true today. More research needs to be done to explore how online media are received by audiences and how the reach of social media is operating to shape socialization.