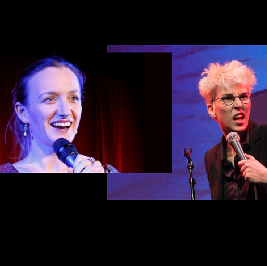 For one night only, some of the finest national talent together in one room for your amusement and for the benefit of some very good causes.

To many people, Kate Smurthwaite is best known for her outspoken TV appearances on Question Time, The Big Questions and the news channels (though she is apparently too controversial for Goldsmiths College). But she is still first and foremost a stand-up, and her latest show is “The Wrong Sort Of Feminist”, about the Goldsmiths saga, Ex-Muslims, choice, feminism, the treatment of asylum seekers, the NHS, Couples Come Dine With Me and edible pants.

‘Hilarious … a powerhouse of observational wit’ (Spectator). ‘An important and inclusive narrative on our society’ (ScotsGay). ‘The verve with which she articulates her views on our land is monumental’ (BroadwayBaby.com). ‘Comedy that cuts through the crap’ (ThreeWeeks). ‘You come across as not only being hypocritical, but incompetent and mendacious.’ (Frankie Boyle)

Iszi Lawrence gigs across the UK as well as internationally and has headlined nights in Oslo, Prague, Dublin and Brussels. She is a seasoned performer, having appeared in critically acclaimed shows at the Edinburgh Fringe since she was 17. Iszi is well-known for her podcasting exploits, namely The Skeptic’s Guide to the Universe, the Z-List Dead List and Sundays Supplement.

“She’s as adept with an anecdote as she is with a one-liner, and her trips down comedy asides are on-the-spot funny.” (The Herald) “She’s good. Really good.” (Oxford Mail)

Andy White is a Brummie bursting with creative energy who combines silly voices and a mad afro to devastating comic effect. Andy has appeared on the BBC New Comedy Awards, Brand Spanking New on BBC Radio 7 and the Weakest Link comedy special. (He won!) His appearance on the quiz featured in his five-star Edinburgh show ‘It Started With A Quiz’. This followed on from his well-received one-man show “Young, Gifted and Beige”.