The Girl Behind the Glass – Thurs 8th Nov 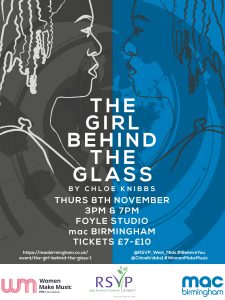 Below is a blog post written by Abigail, one of the performers in The Girl Behind the Glass. The piece explores some of the effects of sexual violence on a survivor and will be performed at the mac in Edgbaston at 3pm and 7pm on Thursday 8th Nov. All are welcome and tickets can be booked here https://macbirmingham.co.uk/event/the-girl-behind-the-glass-1

My name is Abigail and I am one of the performers in The Girl Behind The Glass by composer Chloe Knibbs, a piece which explores the shame and blame that is placed upon people who experience rape and sexual assault.

The piece is written for three musicians, (two singers and a cellist), who all represent an element of one person. As a singer I think that it is so important to be challenged by the projects that I take on and this has certainly been both musically challenging and thought-provoking. When we first started rehearsals for The Girl Behind The Glass for the work-in-progress performance in 2017, we were able to achieve a very open, trusting and supportive group dynamic, which really helped when discussing the issues surrounding rape and sexual assault.

At the start of the current rehearsal process we were also able to have a session with artist well-being practitioner Louise Platt, which was a wonderful way of reacquainting ourselves with the emotional nature of the piece and re-establishing our group dynamic in preparation to explore the piece and the subject matter again. I find that having had such open discussions in such a safe space, I am more confident about talking about sexual assault to my friends, family and colleagues and I hope that those who see the performance will be able to do so too.

My main goal as a performer, is to faithfully present what has been written by the composer, both musically and dramatically. Having Chloe involved in our musical rehearsals, combined with the fact that she is also directing the performance, is very reassuring. We started the rehearsal process by focusing on the music. Being able to ask Chloe specific questions about a certain passage phrasing or the emotional idea behind a melody has meant that I feel more able to give a realistic portrayal of the character both musically and emotionally. There are moments in the piece that as a singer intentionally verge on being uncomfortable vocally and emotionally. The bombardment of the girl by all the comments from friends and family in scene five, for example,lasts as long as we can push the levels of discomfort for both the performers and the audience. I found that performing to an audience, that were in close proximity to the stage area, to be very interesting indeed. I realised that some members of the audience could not look directly at us, as though they were intruding on something very personal. Whilst other audience members watched so intently as though they dare not look away.

What I have taken away from the performance and the rehearsal process, was a sense that having this topic presented as a piece of music theatre, was most definitely a success. Performances like this open up further discussion about rape and sexual assault by all involved performers and audience alike.

There will be two performances of The Girl Behind the Glass on the 8th November at mac Birmingham, at 3pm and 7pm. The shows will mark the 40th anniversary of the Rape and Sexual Violence Project and are supported by the PRS Women Make Music Scheme.