We reclaimed the night! 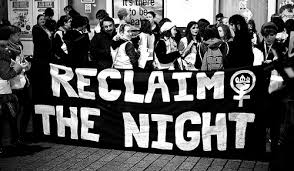 Last night, we marched at the University of Birmingham to demand justice for sexual abuse survivors and to demand the right to use public space without fear.

In 2017 the Guardian reported in almost every country in the world, women walk disproportionately fewer steps each day than men, according to a recent Stanford study which analysed the smartphone data of 717,527 people worldwide over 68 million days of activity. The ‘gender step gap’ is not down to laziness. It’s down to personal safety and women’s walking habits. Feeling forced to use transport instead of walking makes safety a privilege, according to Stop Street Harassment founder Holly Kearl. This option to not walk is only available if you have the financial means to access transport – which means for teenage girls in particular, cost can be a barrier to safety.

A report released last month by the Children’s Society showed one in three girls aged between 10 and 17 in Britain said they felt afraid of being followed by strangers. Multiple girls described being “beeped” at while in their school uniforms by men driving past.

In every sphere of life women and girls negotiate the threat of sexual assault and harassment. Equal citizenship cannot be claimed while this threat restricts lives. Everyone has the right to use public space without fear.

The Reclaim the Night march gives women a voice and a chance to reclaim the streets at night on a safe and empowering event.

RSVP were there along with the new university Sexual Assault Referral Centre service (SARC), increasing support for survivors on campus.