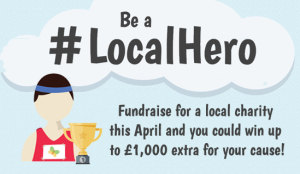 Have you got what it takes to be a Local Hero?

This April, Localgiving is celebrating all the fantastic fundraisers who put themselves out to raise money on behalf of a local charity. From marathons to bungee jumps; sponsored silences to fire walks.

To help give a boost to their efforts, Localgiving will award £5,000 in prizes to the causes supported by the top 20 fundraisers in April. Participants will be ranked according to the number of unique online donors from whom they secure sponsorship throughout the month. The top fundraiser will secure a prize of £1,000 for their chosen cause!

In 2015, the top prize was awarded to Ability Dogs 4 Young People thanks to their fundraiser, Mick – who secured donations from 157 unique donors by jumping out of a plane! Read more about Mick’s story here.

Set up your fundraising page now

Here is a list of the key facts about the campaign. If you have any more questions, please check the Local Hero FAQs.

Conditions of entry: Each active fundraising page on Localgiving was eligible to take part.

Process: Fundraisers will be ranked according to the number of unique donors who sponsor their page within the campaign start and end dates. Donations made outside of the campaign dates will not count towards a fundraiser’s ranking.

Prizes: The top 20 fundraisers at 23:59:59 on Saturday the 30th of April will be declared the winners. Prizes will not be given to the fundraiser, but awarded directly to the charities for whom they are fundraising. Prizes will be awarded as follows:

Charity & supporter limits: Only one donation made by each unique donor counted towards a fundraiser’s ranking. There was no limit to the number of prizes any single group may receive.